My cycling goals for today weren’t overly ambitious, because rain was due over this afternoon and I was keen to avoid it, if possible. Also, the conditions weren’t particularly nice – overcast and a little damp, with wet roads. With a stiff wind coming from the south, I thought I’d do 15 miles or so of the southbound route, then come back.

However – instead of turning right along Kirkby Lane after ten miles, I kept going as far as Desford. From there I found my way to Markfield, where I took this pic, along Altar Stones Lane. 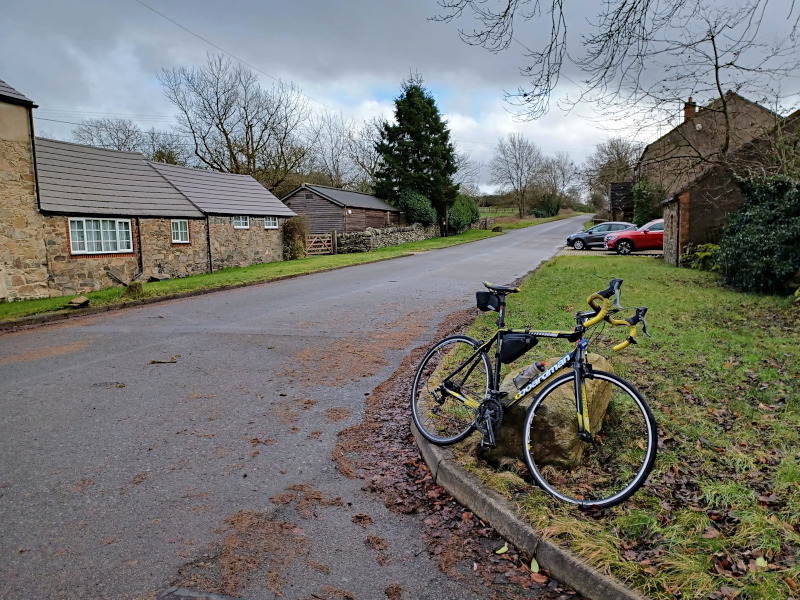 I’ve only ever known Altar Stones Lane as a very quiet dead end; the location of a couple of farm houses and a cattery. There’s no through road to anywhere else. But I’ve been nerding out over old OS maps recently, here: https://maps.nls.uk/os/6inch-england-and-wales/

It turns out that before the M1 was built, this road was the main road between Markfield and Coalville. Then when the M1 was opened in the ’60s, Altar Stones Lane was connected directly to it. Traffic would have come barreling along here straight off (or toward) the motorway junction, about 200 metres from the bike in this pic. Then finally, some time in the ’80s I think (certainly before I lived in Markfield in 1989/90) a bypass was built to take the M1 traffic out of the village, and the lane became the quiet, secluded little dead end that it is today.

I suppose the folks who lived along there must have been horrified when the M1 came along, then elated when the A50 bypass was built, after which their little corner of Leicestershire became quieter even than it was 100 years ago.

Came back home from Markfield an unusual way, through Stanton under Bardon. Very annoyingly, there was only one puddle of any significance along Stanton Lane, and I was overtaken by only one motor vehicle there, a white van. You can guess what happened. I should have stopped a reasonable distance from the puddle after I saw it in my mirror, but I thought I had enough momentum to take me past the puddle by the time the van passed me. I didn’t. Of course it would have been nice if the van driver had tried to avoid the puddle, or slowed down a bit. Oh well.

As it happened a Biblical downpour was visited upon me about a mile from home, so in the end it didn’t matter. I was soaked by the time I made it to the garage. But I gave the bike a good wipe down; I think it’s cleaner than it’s been for months now!