Another thoroughly decent day for cycling forecast today. I thought I should probably do a 100 miler, but wasn’t really sure I wanted to, for some reason. I decided that if I woke up early enough and felt like it I’d do at least 100 miles, otherwise a perfunctory Fondo would do. As it happened I did feel like springing out of bed and doing a long ride when I woke up, so I did.

I’ve devised a new route to Norfolk which is essentially the same as the one I did a few weeks ago, except that after 40 miles it turns south, to join the first Norfolk route that I did four years ago. I certainly wasn’t going to go all the way to Norfolk today, but I thought I’d do 50 or so miles of it then come back the same way.

Cold and cloudy when I set off at about 07:50 but I’d wrapped up warm enough to be comfortable. I was trialling a larger-than-usual backpack to stuff my fleece and tights into, later in the ride – which I did after a few hours after conditions had warmed up nicely. The sun came out in the afternoon. On a longer ride than this I might just have sucked up the hostile temperature over the first part of the ride to save the weight of the additional clothing, but not today. The backpack is nothing special; not very sporty looking or posh. It’s an Amazon Basics product that I think is intended for kids to take laptops to school. But it’s lightweight and did the job very nicely.

I missed the turn for the connecting road unfortunately and had to track back. But the new bit of road connecting the two routes was a delight – nicely surfaced and very quiet. Called ‘The Drift’, for some reason. I went as far as Little Bytham and turned for home again. Really nice to be in that part of the world again. Nice round there. Pleasant memories of my first trip to Norfolk and back, which was a distance record at the time (179 miles).

Like last time I stopped at the shop at Buckminster with a bench outside for a rest and refuel on the way back. Treated myself to a Magnum ice cream. Funnily enough while I was waving my debit card in the proximity of the card machine the proprietor asked me “how many miles you doing today, 100?”. And when I said yes, I’m sure he thought I was going along with his joke.

I was a little dismayed that my lithium AAs in my DAB died after only about an hour, having been freshly recharged. But I put a spare pair in and they lasted the rest of the ride. One of the first pair must be buggered. Shame as they were lasting 12+ hours on a single charge and I’ve only charged them three times. Not to mention they cost £20-odd.

And speaking of disappointing technology I used my GPS G Shock to track the ride. It’s very nice to use, with a brilliant battery life and useful information on the display, until you try to get a track off it and up to Strava. I’ve never yet managed that without re-pairing the watch with the Android tablet and restarting the app a few times and today was no exception. Very cool gadget but let down by the ancillary software.

A dry afternoon, just about warm enough for shorts (and how many of those are left in 2021?) so I went out on a bike after work.

Up through Thringstone and Belton, all pretty familiar stuff until I got to the junction at Long Whatton. Normally I’d take a left there and come back down Top Brand, or maybe go over to Melbourne. But I noticed a road sign to Loughborough and thought – why not? This took me along the A6, not the best time of day for it really with rush hour traffic going past. Don’t think I’d ever done that on a bike, though I used to go that way sometimes in a car many years ago.

When I got into Loughborough I pedalled around aimlessly. All very suburban but quite pleasant. A bit of a change, anyway. I thought of looking for my ex-girlfriend’s family home there, where I used to visit for weekends over 30 years ago. I know exactly where it is in relation to the main road off the M1, but not in relation to where I was. So I gave that up after a while and came back toward Ashby along the A6 again.

However instead of continuing all the way to the usual crossroads at Zouch, which would have been the sensible thing to do, I turned left for Shepshed, in a spirit of adventure. From Shepshed I followed a sign to Whitwick. I quite like having to find my way home along unfamiliar roads – but this was undoubtedly an error as this one took me through Oaks in Charnwood and Abbey Road, a route I always bypass to the north as it’s a sort of rollercoaster of unwanted uphill climbing.

But the steep downhill curve near Charley Road was very exciting, I must admit.

259 miles this month so far, more on Saturday I hope.

I think I’ll have another nose around Loughborough some time soon but I’ll pick a quieter time of day.

A bit windy, very overcast but warmish and dry. Left work as early as I could with the intention of getting 25 miles in. Didn’t have time this evening for much more.

I did a Twycross Bypasser, with the Warton extension. Quite a pleasing run out. Forgot to take my phone with me, so no pics. Felt a little insecure without it, but I reminded myself that no-one used to take a phone with them on a bike until the 1990s. And I wasn’t going far.

Sad to hear the news of Charlie Watts’ passing while listening to LBC. That first generation of rock’n’rollers who came to prominence in the ’60s is already filing through the exit.

Due to navigational incompetence I did 30.06 miles instead of the intended 25, but I made it back in time.

I saw a very small dead bird, near Heather. Fully feathered (perhaps fledged is the term) but really tiny. Hard to say what killed it, it looked intact apart from the fact that it was completely still and lying on the road. Perhaps a Goldcrest (I’ve just spent 5 minutes Googling small British birds).

231 this month! Quite pleased with that given that I was on holiday for a week.

The forecast for today removed its threat of rain, so I thought I’d have a leisurely 30-odd this afternoon. I did a Twycross Bypasser. An unusual variant, in which I did some of the roads in a different configuration would normally be the case.

Cloudy but quite warm, and intermittently sunny. Once again I stopped at San Giovanni for a crafty margarita.

Forgot to resume GPS tracking after stopping briefly along Orton Lane so some of the track is a straight line. But I’ve done the necessary measurements on Google Maps and adjusted accordingly for the spreadsheet.

I was a little concerned to see glowering black clouds gathering a few miles in the distance with a few miles to go, although I was pedalling in bright sunshine at the time. Sure enough I did suffer light rain over the last mile or so. Bad timing you might think, but a few minutes after I’d put the bike away and made it into the house, it started coming down in bucket loads. I’ll call it a draw.

Ideal Fondo weather yesterday, ignoring a very slight risk of rain. Warm, with a light wind coming from the east according to the BBC weather site.

Escaped from work early and was on the road by 3:30pm on the Cannondale. After using the Boardman a couple of times it felt delightfully light and quick, I must say. A real pleasure. It just seems to devour the miles you put in front of it.

Had a wee stop in the trees off the road at Prestwold Park, not long after my DAB batteries had died. The spare rechargeables I’d brought with me were flat, I must have put them away without charging them. No matter, I thought – I’ll start the next Reacher novel on my MP3 player. Nope, I’d forgotten to put the micro-SD card back in. So I listened to 5 Live using the BBC Sounds app on my phone.

My bike computer ran out of juice as well later on, so I used Strava on the phone to record the last half of the route then stitched it to the Garmin track using a GPS editor (gpsprune). Normally I’d be annoyed not to be able to see how many miles I’d done without pulling a phone out of my back pocket. But on my default Fondo route I have memorised a number of exact distance-from-home landmarks, at 21, 18, 15, 12, 10 and 5 miles.

I was quite annoyed when I reached the crossroads at Eastwell to notice the two small wind turbines on an adjacent farm there spinning determinedly in a direction that implied I’d had a tailwind, not a headwind, on the way out. Sure enough, when I turned for home I had it in my face. But it wasn’t strong and the bike still seemed to zip along quite happily on the way back. 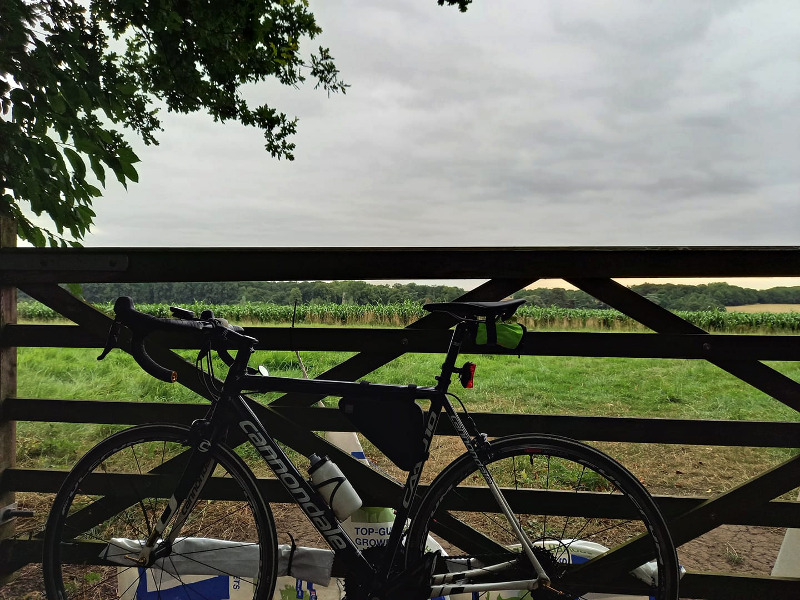 I used the MP3 player app on the phone on the way back, to listen to Blood On The Tracks, then Low. For some reason the app was set to ‘shuffle’ mode and despite a long and distinguished career in Information Technology and an honours degree in Computer Science, I couldn’t work out how to switch that off. But Low works surprisingly well with the desolate, atmospheric instrumentals from the second side intertwined with the stripped-down pop tunes from the first. I started to think that Bowie might have missed a trick.

Lamentably poor preparation on the electronics front, but my phone came to the rescue. I maintain that a smartphone is the single most important piece of cycling equipment after the bike. I was quite pleased to see that running Strava and a radio app or MP3 player at the same time didn’t put too much of a dent in the remaining charge.

It’s been a sparse cycling month, mainly because I’ve been on holiday in Northumbria and Scotland. But I’m back now, still off work today and decided I’d do the August Fondo.

I took the Boardman, to celebrate the fact that I’ve had it – or some of it – for six years now. And also because it was likely to rain. Quite a strong wind from the west. The idea was to do the “upper” westward route, then join it to the “lower” one. But by the time I’d done 25 miles or so I decided I was just going to come back the same way.

Went a little bit further than I have along that route – it degenerates a bit over the last mile or so to the endpoint into a narrow, stony lane but it wasn’t too bad. Got lost slightly at the far end but soon got back on track.

The headwind on the way out was annoying though not as much as the occasional drizzle. But a good run out nonetheless.

63.14 miles, 104 this month. Hope to get that up to 300 before September. Bit depressing that the end of the summer is not far off. Still haven’t had that run out to Wales and back that I promised myself.