I wanted to do 25 or so, despite a fairly powerful wind blowing from the west. I was going to do a Twycrosser but shortly after setting off I got the urge to go up Top Brand. It’s lovely along there when the sun’s shining, as it was this afternoon.

Unfortunately that left me at a bit of a loss as to where to go after Top Brand. Usually from there I’d do Isley Walton, then Melbourne. But that would mean coming back up a steep hill, or a longer ride than I intended. So I turned left after Tonge, toward Breedon.

About three miles later I saw a sign for the Cloud Trail. This is a cycle and walking route based on an old railway line converted to a path. I’ve been meaning to try it for years, and I was on my gravel bike, so – I gave it a go.

Unfortunately even on the Tricross it was a bit too stony and rough, for me anyway. Not my sort of thing. So after a bit less than a mile, I turned back.

It does have a very nice view of a quarry, though. Would be a good walking route for sure.

Anyway from there I descended through Worthington and Newbold, much as I did a few weeks ago except that it was dark that time, then Coleorton and home the usual way. Back on 25.79 miles. 528 done this month. I’m sure Nick will have overtaken me by March.

Happy to have made a strong start to the year because I want to get my monthly targets down to the same as they were last year. They were based on a lower yearly target.

Today’s mission was a simple one – to do a fondo, which would get the January distance tally up over 500 miles. Not bad weather for it – mild, mostly sunny and dry – apart from a stiff wind from the west. So I decided on the Upper Westbound Fondo route, an extension of my usual trip along the Beloved A Road that takes a turn northward after Sudbury, toward a village called Marston Montgomery.

I did that, turning back after I’d reached the requisite half-fondo distance, to come back the same way. Or so I thought. Once I reached my 20-miles-to-go landmark in Hilton I noticed that I’d done fewer miles than I should have, and was due to arrive home short of the requisite fondo distance. Couldn’t understand it, but on checking the track after I got home, it turned out that I’d turned back after 30.2 miles instead of 31.2. Must have been pure absent-mindedness. 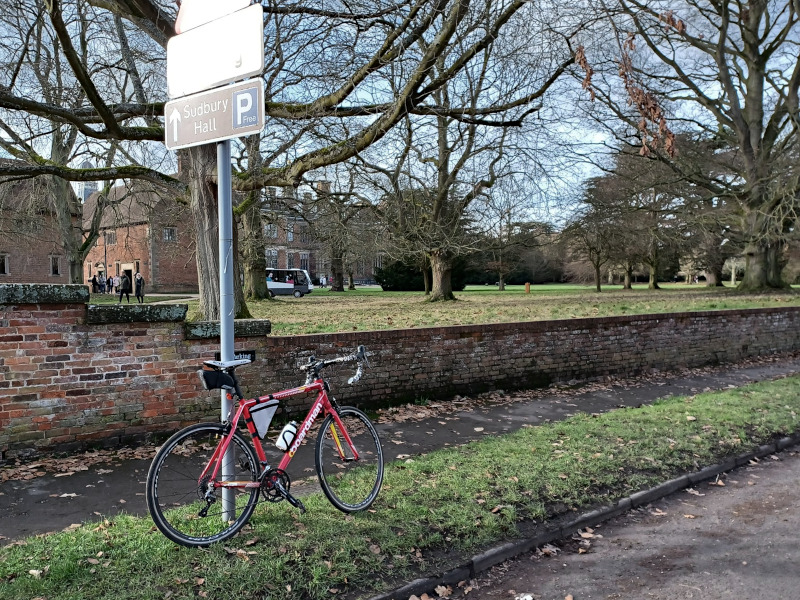 Actually the road off the A515 that goes toward Marston Montgomery is a bit crappy, and worse still it involves a steep descent, which of course means a steep climb on the way back. It’s brutal, but short. But it’s very hard to get a viable fondo distance route over that way.

Anyway, I made up the distance by coming back detouring via Isley Walton after Melbourne. 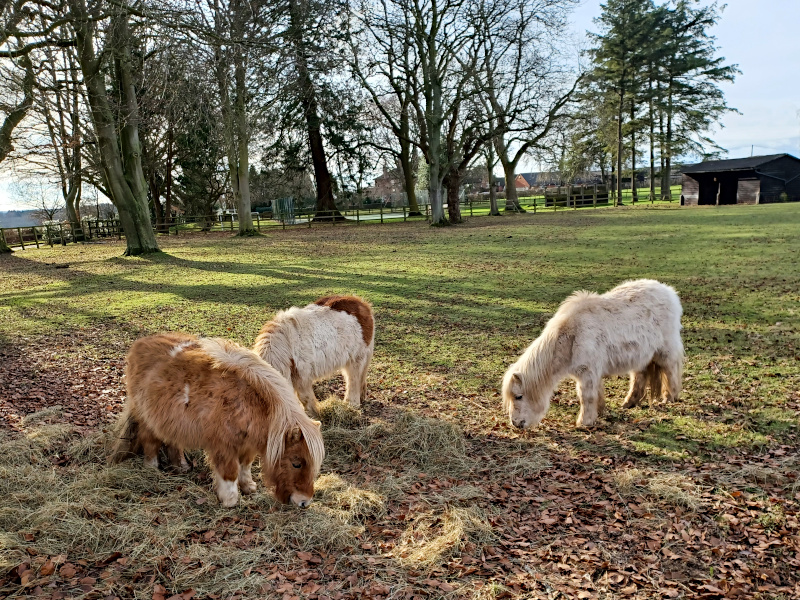 Listened to 6 Music, Cerys played some good stuff. Then Peel Acres with the actress Tamsin Greig; an odd choice since she seems to know next to nothing about music. But it was entertaining enough. Then FA Cup footy.

Pleasant run out and very happy to have done 500 miles in a January (502 in fact) – that’s the first time I’ve done that.

Someone invited me to a meeting at 3:30pm so I couldn’t get away as soon as I wanted to this afternoon, but I attended it in cycling clothes – not something I’d have done in the days when I worked in an actual office – and I was away and pedalling by about 4:05pm.

The wind was coming from the west as usual and I thought I’d do the time-honoured Upper Westbound Route, or about 20 miles of it – then come back. I always enjoy doing that one in the dark on the way back.

Just as well I took an abundance of spare front lights (I’m a bit paranoid about rechargeables) as I had two run out of juice along the Beloved A Road.

Not too cold out there. Very nice to get out, it’s been a few days.

Back on 45.05 miles, which takes me to 440 this month and the tantalising possibility that I might get it up to 500, which I think would be a first for a January.

Another very cold, sunny, dry day. I mounted the Boardman and headed south again, into a light wind. I particularly wanted to do 36 miles, to get the January total up to 400.

But once I got to Earl Shilton I decided I didn’t want to push up the hill there again. I only did it on Saturday. And it was uncomfortably cold, so I turned left instead, and along Leicester Road. Then I took a left along Peckleton Lane and looped back into Desford. I believe I did exactly this over the Christmas hols, except that I came out of Desford in a more coherent fashion. This time I got lost a bit in the suburbs.

I came back a different way just for a change, through Barlestone and Nailstone.

Beautiful sliver of a crescent Moon on display, with the rest of the sphere just visible in the ghostly Earthshine. Looked like artwork from a 1950s sci-fi comic strip.

Another very cold day but at least it was sunny. A light wind was blowing from the south. I’m on call today, but I thought I’d go down the southbound route for as long as my nerve held, then come back. I got as far as Broughton Astley before turning for home. I wouldn’t have had any qualms about going further probably except that our not-overly-talented sys admin team did some operating system patching for one of our customers early in the week, and the customer was due to reboot the servers in question today. Therefore there was a higher-than-usual probability that I’d get called. Although I wasn’t.

I didn’t regret turning back as soon as I did after sunset though – the temperature fell off a cliff. But it had been nice out there in the sun.

Listened to the remainder of The Man With The Golden Gun – so I’ve got through the whole thing in two rides, which surprised me. I guess it must be a lot shorter than the average Reacher novel.

Stopped at the Post Office at Broughton and bought a sausage roll, which was awful – very dry, and an Ice Cream Snickers Bar which even at 1C was delightful.

I set off with the firm intention of doing a Twycross Bypasser of roughly, but at least, 34 miles in distance – to get the January total up to the target (324 miles).

Cold out there, but bearable. Until I watched the sun disappear over the horizon while pushing along Kisses Barn Lane, at which point the temperature seemed to subside by a couple of degrees almost instantly. I decided there and then to keep it decently short although I didn’t come back the very quickest way.

Beautiful clear night with a fantastic view of Orion especially, marred slightly by the fact that I’d come out of the house with my reading glasses instead of a pair of varifocals, so was having to make do with unadorned eyeballs.

I got back just in time, or so I hoped, to get a decent view of the ISS coming over at 6:20pm once I’d got the bike into the garage and grabbed a pair of distance specs, but nope – somehow I missed it. Oh well it’s due back over tomorrow!

I took the Tricross out for the first time this year and I must say it’s rolling really nicely at the moment. Responds really smoothly and the big tyres soak up road buzz very well.

I entered Warwickshire briefly on the western end of the route, so that’s another neighbouring county box ticked.

A very cold day, but the temperature was just about up above freezing by the time I set off in the afternoon and the wind from the west was fairly light. Wasn’t sure what to do really. I thought of going up to Derby but I didn’t. I went up over Swarkestone Bridge via Top Brand, west along the A road as far as Willington, then I decided to try a route I’d thought of while poring over old GPS tracks, down through Repton, Hartshorne and Ashby.

Unfortunately this didn’t turn out to be a great idea. The road between Repton and Hartshorne is gross, really lumpy and badly surfaced. This evening it was wet, as well. Especially annoying in the dark, even with a powerful front light. I was very happy to make it to Hartshorne, which is more familiar territory.

I think I may have done that road before, and made a mental note not to do it again. Unfortunately the cerebral ink with which I metaphorically scribble those reminders is prone to fading, these days.

A few specks of snow near Swarkestone but otherwise no precipitation.

Decent weather, not too cold but with a possibility of rain in the afternoon. I set off just before 1100 to do some of the Lower Westbound route through Lullington and Edingale.

I got as far as Hill Ridware having done 25 miles, then decided to come back.

I actually wrapped up a bit too warm. Milder than I expected. Mostly sunny on the way out but patchy light rain and drizzle on the way back.

I was followed by a learner driver between Heather and Measham. I had about half a mile of visibly clear road in front of me, but she spent about ten minutes deliberating whether to overtake, and holding up a queue of traffic behind her.

I started a new audiobook, Ian Fleming’s The Man With The Golden Gun. I read most of the Bond novels in the ’90s but I skipped that one, because I’d already read it in the ’70s. Nice to be reacquainted with it, it’s a cracking story. Then I listened to footy on 5 Live, Chelsea vs Palace.

I don’t often do a 50 mile ride without doing a fondo, but today was one of those days. Perhaps I should have but given the weather I don’t feel as though I’ve missed out.

Left work early, and with a strong wind coming from the west, decided on a Twycrosser. Wanted to do at least 34 miles, to get the January distance tally up to 200 miles. Did a fairly long version, with a detour to Orton and went all the way down to Fenny Drayton.

Really enjoyed gliding along Fenn Lanes with a tailwind in the dusk.

Just checked to see if I penetrated Warwickshire but nope, I merely flirted with it. I do believe I’ve still only done Derbyshire and Staffordshire this year.

Hope the wind changes direction soon, I fancy a run out east.

I don’t often ride on consecutive days but I didn’t do a great distance yesterday and I wasn’t going to this evening, so – with the weather looking iffy tomorrow, I decided to see if I could crank out another 30 miles or so. I do want to get the year off to a good start with a decent tally for January, so I can get the remaining monthly totals down a bit. Currently they’re higher than last year.

I set off with no particular plan other than to go roughly west, but I’d decided to do a Twycross Bypasser within half a mile of setting off. So I did.

Quite cold out there, a bit colder than yesterday although I set off later in the day.

Nice view of Mars just above the horizon along Sibson Road, about half an hour after sunset. Very dark by the time I was pedalling along Gibbet Lane. Spotty rain for a few minutes near Shackerstone, but I wasn’t bothered.

Listened mostly to 5 Live, and the reaction to Gareth Bale’s decision to retire.